I can feel my skin getting softer. I can smell the salt water. I am so close I can almost taste it!

I am off to Seattle tomorrow for a pre-Easter sojourn (I was meant to go for Easter but who knew all the cheap seats would be sold out!). I am excited to get away for a bit, to not be in such a dry climate, I am excited for the potential to see a killer whale and I am excited for the amazing amount of coffee I plan to drink. Sure, I’ll visit the original Starbucks but I plan to taste test the plethora of indies Seattle has to offer as well.

The fabled interior of the Elliot Bay Book Co.

As I originally planned to have another week in Calgary before leaving, I have spent the morning doing some hurried research and came across a real gem: the indie bookstore Elliot Bay Book Company.  It looks like something out of a book-lovers dreams: nestled in an old brick building in the historic area of Pioneer Square it houses rows and rows of independently chosen/recommended books. And, to boot, there is a cafe in the basement serving Zeitgeist coffee. Don’t quote me on this as I read it on someone’s blog but of course an indie store would serve a coffee called Zeitgeist (if you haven’t watched the movie yet, start googling it).

The bookstore is well known not only for its character and charm but also the book readings it hosts. We are going to miss the famous (in my mind) Arundhati Roy by one night. For those of you not familiar with her, she is most well known for penning The God of Small Things.

As with all independent bookstores, the big boys are creeping in and last years credit crunch hit EBC hard. As a result they are relocating to a cheaper location within Seattle. Luckily for me, their very last day in Seattle is the day after we arrive. I know where my first stop is going to be: breakfast at EBC Cafe and then as many hours as Andrew will tolerate in the bookstore above.

I’ll be sure to bring back loads of new suggestions.

See article in the Globe and Mail for the full story (www.theglobeandmail.com/books/atwood-wins-major-international-prize/article1509558).

Canadian novelist Margaret Atwood was announced as one of the 2010 winners of the Dan David Prize at Tel Aviv University and will be awarded $1 million to share with one other winner.  The judges praised Atwood’s work, among other reasons, for having “enabled, for the first time the emergence of a defined Canadian identity, while exploring both national and transnational issues, such as colonization, feminism, structures of political power and oppression, and the violation and exploitation of nature.”

With more than 35 novels to her name, there’s no excuse not to have read her work, especially as a Canadian reader/writer/woman. We’ll add her to our list.

As a bit of an aside, I’m not sure which is more exciting, the thought of receiving an award in Tel Aviv or the notion that an author can strike it big (albeit at the age of 70) without having penned Harry Potter. Either way, congratulations Ms Atwood.

What are you reading?

Posted on March 16, 2010 | 2 comments
I am embarrassed by the date on my last post – has it really been nearly a month since I’ve written? My excuses? Plentiful. In alphabetical order they are: coffee, friends, Gilmore Girls, last snowboard session of the year, laziness, the Oscars, puppies, reading, reading non-fun material, sunny weather, watching all Oscar-nominated movies, work and… well that’s it really isn’t it?

A number of reads on the radar this week: Nikolski by Nicolas Dickner (translated by Lazer Lederhendler) which was just selected as the 2010 CBC Canada Reads winner (though judging by the other selections as well as the panelists I would take this with a grain of salt), Fooled by Randomness by Nassem Nicholas Taber can never be read enough and Neromancer by William Gibson for a look at the novel that started the world of the Matrix.

And while I’m on the topic of reading lists let me discuss my most recent read: What is Stephen Harper Reading? by Yann Martel. I cannot sing enough praise for this book. It is hard to pinpoint what, exactly, I enjoyed so much about this reading list-cum-literally outlook on Canada and more poignantly our current leader. I do think, however, an attempt to identify these items will illuminate the core items that, in my tiny opinion, make for a great read.

Despite the myriad of choices (yes,  Animal Farm and Candide are among the selections but so are less obvious reads such as Virginia Woolf’s To the Lighthouse and Letters to a Young Poet by Rilke), Yann is consistent in his purpose: with every selection he pleads with Stephen Harper to open his eyes to the bigger (and often better) world that is held within books. He asks him to look beyond the tactical use of prorogation and remember there are important things like the arts (albeit in his own self-interest) that should not be forgotten. If only Stephen would actually crack open one of the books carefully chosen by Mr. Martel, perhaps he could tell the world that he has a new favorite book, one that easily replaced his old standby the Guinness Book of World Records (this is not a joke).

In all of his admonitions, Yann is ever so eloquent. The use of literary tools comes so easily to Martel they seem innate.  Instead of creating a whirling mass of images the reader must wade through to dig out the intended meaning, Yann’s analogies skip over the tongue without notice. As such, there is no break in his ever important cadence and the reader is fooled into thinking the conjured image was laid out before them from A-Z: “if [Shakespeare] was a spring, we now all live in his delta.”  Yann continually impresses on the importance of cadence in writing – the need for flow and rhythm in the written word – for “the origin of language is oral, not written” and is successful in achieving a natural flow in his own right.

There was one point in Yann’s writings that I initially objected to: the sheer emphasis he put on the role books (should) play in one’s life. Obviously, I am a proponent of the written word: I enjoy losing myself in books, I enjoy learning from books and I enjoy when a books forces me to rethink what I always thought to be true. However, when Yann taunts Mr. Harper by suggesting that there should be a required reading list for prime ministers, I felt he had taken the idea beyond the hyperbole. He goes on to posit that since we expect a certain level of knowledge with respect to the history of Canada, for example, or current affairs and economic policies, that we should also hold the prime minister’s “imaginative assets […] accountable.”  When Martel rhetorically asks the honorable Mr. Harper “… if you haven’t read Under Milk Wood or any other poetic prose, if you haven’t read Their Eyes Were Watching God or Drown or any other American Novel, if you haven’t read the Cellist of Sarajevo or the Island Means Minago or the Dragonfly of Chicoutimi or any other Canadian novel, poem or play, then what is your mind made of? What materials went into the building of the dreams you have for our country?” my gut reaction was to cry out: but what of life experiences? What of the hardships we overcome in the here and now that make us who we are? The successes? The triumphs? The failures? Though his questioning may have been spotted with sarcasm, this is a pervasive theme in Yann’s quest to illuminate Harpers failure as a (among other things) literary man. It wasn’t until Yann sent Mr Harper a book which Yann himself does not agree with that I came to understand just how important this past time of reading is, especially when pertaining to the head of our home and native land: “one must measure one’s intellect against systems of ideas that have been developed over centuries.” What a wonderful barometer this would be.

As Mr. Martel describes his reasons for selecting each and every piece of literature and often the personal circumstances that lead to such a choice, a sense of intimacy is created between reader and author (to the point that I felt I could become Yann’s pen-pal if I desired) because, as Yann himself explains, “to like the same book implies a similar emotional response to it, a shared recognition of the world reflected in it.” And isn’t this what everyone is looking for anyway – someone to share life with?

This is a book I will likely pick up many times in the future, if only to re-read a brief section or to aid me in my search for a new book. It is a book that provides food for thought, a book that forces one to think more dynamically about the stories we read every day and it’s writing allows the reader to take each journey uninterrupted. There are many gratifying passages from this book, but I will leave you with one of my favorites: 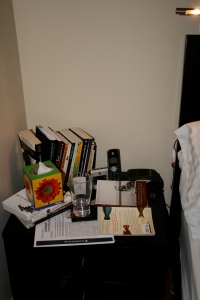 The space next to where I sleep

“… every person has a space next to where they sleep, whether a patch of pavement or a fine bedside table. In that space, at night, a book can glow. And in those moments of docile wakefulness, when we begin to let go of the day, then is the perfect time to pick up a book and be someone else, somewhere else, for a few minutes, a few pages, before we fall asleep. “